“LALANNE: Have you seen his final films?

GODARD: Yes, on DVD. Triple Agent is a very strange film. I'm really into espionage, but I wouldn't have imagined that such a subject might interest him.”

"All my films are spy films in a sense. They all deal with characters spying on others or being suspicious of others." 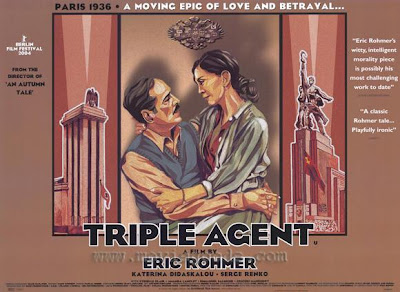 One way is to look at the late works of a major artist’s career is to see it as its culmination. The artist, at the peak of his talent, examining as well as refining to its final shape, the craft and philosophy of his métier; re-examining well-honed themes with a wealth of experience, personal as well as historical. The crucial example is perhaps John Ford’s The Man Who Shot Liberty Valance, set entirely in sets and interiors (acknowledged by Ford in a letter to Bosley Crowther as an atavism to his silent films); non-realistic casting of aging actors as types and icons more than flesh-and-blood characters and a poetic examination of the transformation from wilderness-to-civilization, and by extension the Western genre itself. Along with this is the temptation of seeing the late work as a fount of serenity and a promise of wisdom at the end of a long life. The other way to see the late work, examined at some length by Edward Said, is to perceive an artist, free from commercial considerations and indifferent to social tastes, confronting the contradictions at the center of his oeuvre without any attempt or promise of resolution.

Before The Lady and the Duke, Rohmer’s period outings were box-office failures. His sole previous non-contemporary films were made back to back after the completion of Six Moral Tales (the first of his film series). Die Marquise von O… and Perceval le Gallois were highly stylized literary adaptations. His final film, Les amours d'Astrée et de Céladon, completes this cycle. The Lady and the Duke and Triple Agent on the other hand, despite its period grounding and the stylization of the former’s use of digital effects, are markedly different in the detailed historical milieu in which the story is set and which Rohmer brings to life in his mise-en-scene.

These films differ too from each other in the approach to history. The Lady and the Duke adopts the journals of Grace Elliot (Lucy Russell) as its spine and remains at all times within her subjectivity, her experiences and purview of things. Triple Agent, though set in a far more recent period of history, has no such detailed documents to offer. The facts of the original case proliferate in enough missing information to befuddle the likes of Borges. Rohmer evokes the implications of the dark, shocking story of Nikolai Skoblin and his wife, by focusing on their marriage. The single complication of this happy and contented marriage is the period in which the story is set and the specific occupation of the husband. The wife’s background and occupation, her Greek origin and profession as a painter, is a major departure from the original story. “A beautiful, sensitive, touching woman, a foreigner borne on the tide of History,” says Rohmer, “I feel very comfortable with this character.” 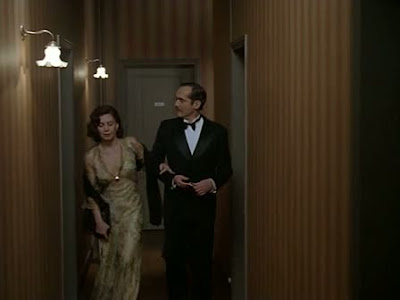 Aside from two crucial and carefully staged scenes at the beginning and towards the end of the film, there are no scenes of Fyodor Voronin(Serge Renko) outside the viewpoint of his wife Arsinoe(Katerina Didaskalou). With regards to the actual nature of the plot, Rohmer lets us know only as much as Arsinoe learns and knows. Yet Rohmer also situates another viewpoint over that of Arsinoe and that is the actual reportage of the newsreels. Rohmer daringly uses nine excerpts, carefully edited and cut, to structure his film. The newsreels serve the same relation to Triple Agent, as the Grace Elliot’s journal does to the previous film. It tethers the film to actuality. The narrative of the Voronin couple unfolds from May 1936 to September 1937, succeeded with a brief, stark epilogue concluding the action at 1943 in the middle of the Nazi Occupation. Title cards tally the years and months of the action of the story. 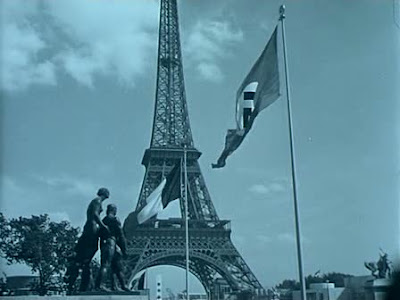 Rohmer’s use of these newsreels covers greater ground than mere period dressing. These newsreels are obvious public records created for the public of its own period, serving today as a record of its time. Rohmer, who was 17 when the Skoblin affair occurred, must have known these newsreels as do the characters of his film. A newsreel depicting a bombing of a factory cuts to Russian émigrés discuss theories of conspiracies on the perpetrators of the bombing. A conversation about Picasso’s mural for the World Expo of 1937 cuts to a newsreel showing the highly politicized event. The newsreels evoke the period as the characters lived through it as well as the way the contemporary audience will perceive it at one and the same time. The Nazi and Soviet pavilions reek of kitsch, the deadpan coverage of these monstrosities makes lampoon irrelevant. The audience benefitting with the hindsight of the eventual collapse of these entities can afford a wry smile that faded when Rohmer lingers to a shot of the Nazi flag fluttering against the Eiffel tower. Even more so in the scenes covering the Spanish pavilion. Rohmer preserves from the reportage, a haunting lateral pan of Picasso’s Guernica. The newsreel shows the painting as it appeared then, a new urgent work by the most innovative of all painters, freeing it from the baggage of international artistic treasure it has carried since then. 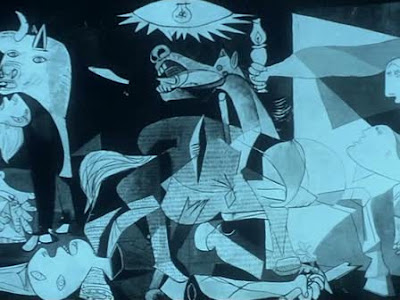 Rohmer’s double perspective evoking life as the characters live it and history as we know from hindsight, allows him to evoke the special mystery at the heart of the film as well as chip his two bits for historical speculation. Arsinoe, as the sole sincere apolitical character in the film, listens at the beginning in silence as Fyodor delights his embassy with his insight into the rise of the Popular Front and the implications of Stalin’s condoning of the cross-partisan affiliation of communists, socialists, middle-class liberals and Catholics. She grows progressively more curious in each public display of her husband’s dizzying display of his keen political acumen, which despite his essential dubiousness, contains keen insight that we cannot ignore. With his Dostoevskian name, Fyodor Alexandrovich Voronin cannot escape bearing with his intelligence, an arrogant appetite for performance, verbose monologues and pithy summations. When he describes to Arsinoe that he is a man behind the scenes, pulling strings, his wife asks on our behalf, “What strings?I know what you mean but how?”, he replies, ““That…is a trade secret. A state secret, even.” The firm, steely eyes of Voronin, at once the most talkative and enigmatic of spies, betrays no emotion, not even to the woman he loves. What can be perceived is a vain relish in his power for dissembling. The heart of the film is the extent to which Fyodor is capable of using it on his wife and to what extent will she resist it. 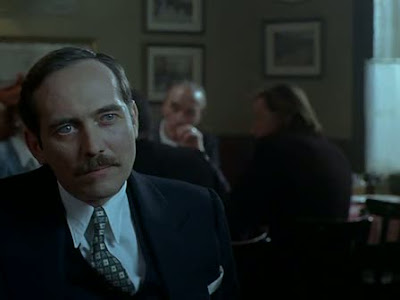 Fyodor promises to Arsinoe that he never lies to her and so avoids discussing his line of work at home. His concern for her health leads him to resettle to a rented country house of their wealthy friends. The main story of Triple Agent begins off-screen as do other key events of this film. It occurs in a casual conversation between Arsinoe and Maguy(Cyrielle Carrier), the wife of the patron lending them the house. She informs Arsinoe of rumours that her husband is a double agent on the pay of the Soviets. Arsinoe scoffs at that but she is speechless when informed that her husband was seen at Berlin entering the headquarters of Reinhard Heydrich. She responds defensively that he is in Brussels, the last postcard sent to her was marked there.

Voronin is outwardly a member of the White Russians Veterans Association. The White Army, of little obvious threat to Stalin, seems mostly to work as a cultural center for Tsarist exiles in France. Fyodor’s presence in the Third Reich and its dark implications mark the beginning of the erosion of her private space, which the newsreels depict in gradual escalation until the final erosion of the state of war. Arsinoe, owing to her marriage, experiences the consequences of events and choices made by agents of power through specific actions which she does not see nor comprehend. Fyodor weaves around him a tangle, establishing himself as the most politically astute and intelligent of the doddering relics left of the White Russians, all the while mulling over defecting to the Soviets at the same time maintaining his life and influence in France. Arsinoe’s discovery of his real activities creates a sense of desperation in his acts. Fyodor announces that he wishes to defect to the Soviets, being appalled by the vulgarity of the Nazis, he is shocked at her outbreak of happy tears. Her sense of peace is wavering thin, subjected as she is to the same torture Joan Fontaine is in Hitchcock’s Suspicion.

The moments which create the greatest ambiguity is the sequence of Dobrinsky’s kidnapping. Like every spy moment this one isn’t seen, we see details, we notice pieces that carry curious hints. In a scene where she is present but a conversation she does not hear, Fyodor converses with two gray haired men in Russian. As in the real case of General Miller, these gentlemen pose as Germans. The kidnapping scene is announced in a stark shot of Fyodor against the dressing table. He convinces Arsinoe to fix an appointment at the dressmaker, so that she would wear something different for a cocktail dinner. The most startling moment in the film occurs when Fyodor prevaricates and leaves Arsinoe alone at the shop. Arsinoe sits on a sofa and starts to read, a dressmaker moves past her. The decoupage of the film is arranged in direct cuts with no dissolves and fades which makes Rohmer’s use of the iris-effect startling, beautiful and elegant.

Triple Agent which is set in the twentieth century, and a reflection on the twentieth century, ends in a completely desiccated final scene. Set in the midst of the Occupation, instead of the Liberation, Rohmer in his final period provides no sureties to the immense inscrutability of the human motivation at the centre of his story. The least political of the French New Wave auteurs crafts a film where politics are at the centre of every dialogue, movement and action, which seeps into and completely obliterates private life.

In the crucial final conversation between Fyodor(Serge Renko) and Arsinoe(Katerina Didaskalou), the dialogue, the direction and Renko’s performance particularly emphasize the use of the word “grotesque”. He describes the kidnapping of General Dobrinsky (Dimitri Rafalsky) and calls it a “grotesque” kidnapping. “Grotesque” applies in far greater measure to the final fate of Fyodor Voronin, (“a brilliant man”), and his “charming wife”.

“Is she still in prison?” asks the Gestapo officer at the end of the film.