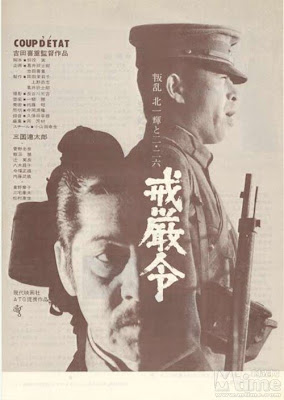 Kiju Yoshida's Kaigenrei(Coup d'Etat) begins with an assassination. After the title and director's credit we enter the landscape of the film. The grabs below give a proper sense of the unusual camera angles that Yoshida employs in the opening scene and throughout the film. Unusual both in its expressiveness and its stark beauty. What it doesn't obviously provide is the sense of movement, the rhythm of the cutting from one fixed camera set-up to another which is part of the power of the film. The left-hand side of the opening shot is obscured by the roof of a house angling forwards. In the far distance we see two people greet and bow to each other and then walk in opposite direction. The old man(who we learn is Zenjiro Yasuda, the head of a corporation) walks forward into the background while the woman moves down the frame, to the position of the camera. 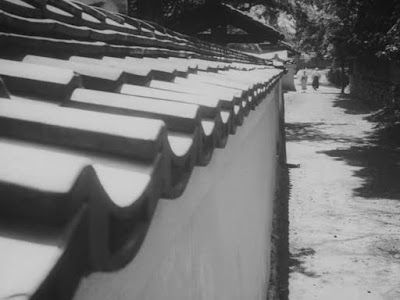 The very first cut of the film serves as a reverse shot to this long-shot. In the far left top corner we see a figure standing against the bare wall. 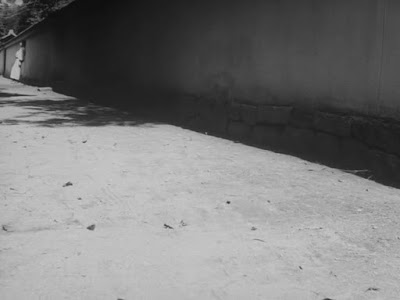 Another cut gives us a look at the character. 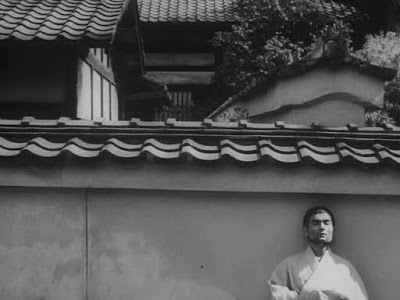 Asahi Heiho(Tsuji Kazunaga) embodies the serene majesty of the assassin. We see him and are positioned with him rather than his would-be victim, Yasuda. But Yoshida's framing dwarves him beneath or embeds him inside the structures around him. Yoshida's mise-en-scene is conceptually precise to maintain this even with the first close-up shot of the film. 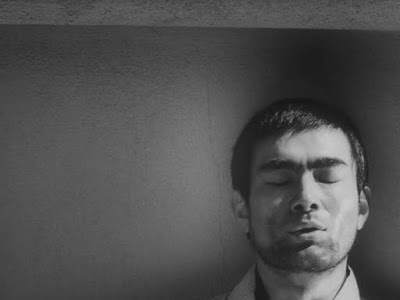 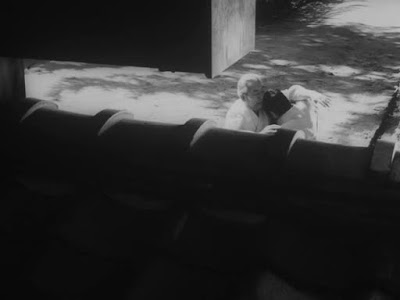 After Asahi finishes his count-to-ten, he slips off his sandals and moves barefoot calmly at first and then with a war cry he rushes forwards towards his target. What little we see of the assassination is obscured by the roofs of the houses behind the wall. What we don't see is the fact that Asahi commits suicide after killing the old man. A suicide which he planned ritually and for which his sister is interrogated by the police. The film begins in effect with a prologue of the end of one story. The story of a radical who becomes an assassin and segues to the next story, that of his ideologue Kita Ikki. 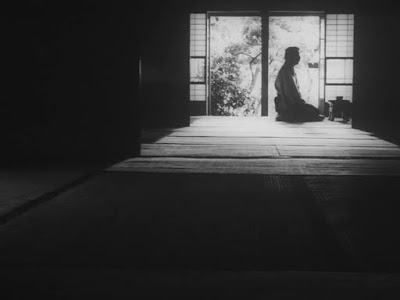 We first see Kita Ikki (Rentaro Mikuni) in silhouette, his voice intoning prayers to the shrine which is the focus of his attention and concentration. The shrine is one of the visual tropes of the film. When we first see Kita in contemplation, we see him perfectly assured as the patriarch of his house. His voice sounds throughout the long corridor as his wife enters the room to inform him of his guests. As the film advances, Kita implodes or loses conrol of his role in the house and his own sense of identity. In one scene that reminds one of Nicholas Ray's Bigger Than Life, he decides to educate his son Daiki(who is in fact the son from his wife's prior marriage) about his family history and the necessity of being a revolutionary after he relates to his wife a dream he had about the emperor.

Although the film touches on in some detail about a famous failed coup d'etat in 30s Japan, a coup for which Kita served as an ideological influence, much of what we would expect in a film that attempts a dialogue with this kind of history is absent. There is little in the way of a grand narrative summation and exploration of the events leading towards it. (This is further hampered on account of the fact that I did not see this film with the most effective of english subtitles.) This is also not by any means a biopic of Kita Ikki, who just like the figures in the opening scene is often dwarved by the yawning surroundings. 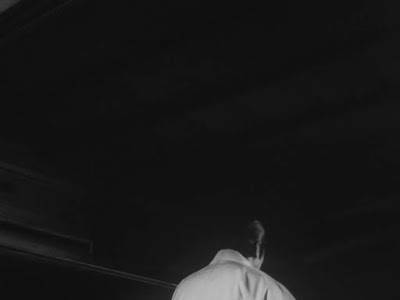 In so far as there is a plot, it revolves around the preparations of the coup d'etat to which Kita is shown as an ambiguous and ambivalent influence. He comes across a soldier (Yazue Miyake) who gushes to him whether he is in fact Professor Kita Ikki and Ikki in turn takes him under his wing as a pupil. In Chris Fujiwara's interview with Yoshida, the director states that his initial idea was to tell Kita Ikki's story through the viewpoint of this figure entirely. In the final film, the young soldier serves as a character who surrogates for Kita's contradictory idea of rebellion and reforming the state to liberate the Emperor who is in fact the head of state. In some scenes he confesses to being a spy which Kita regards as guilt for his inability to following through with the sabotage mission given to him or the desperation of being a young man trying to impress his mentor.

When Kita is arrested in the end, he is led to a room where he finds his young protegee staring at him. We cut to a camera angle creating a series of semi-circles framing the exchange of gazes. Was the young soldier in fact a spy? Or did he lose his nerve in the face of the crackdown? Or perhaps did he assume the identity that Kita subconsciously expect him to take on. The irreconcilable idea of rebellion embodied by Kita is tied to what one character calls his masochism. 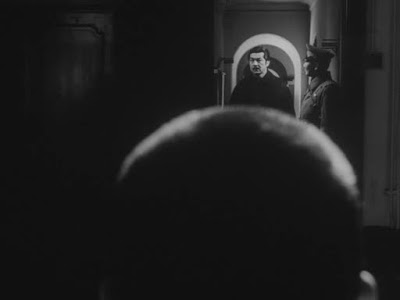 Yoshida's Kaigenrei is ultimately a film that is filled with a pervasive enigma, comparable to Resnais' Last Year at Marienbad though his film is all the more enigmatic on account of being set in a tangible socio-political reality dealing with real historic figures. The film doesn't look or feel like a period film despite the high degree of versimilitude in its handling of period detail and location. It's expressive black-and-white framings and geometrically inclined camera angles creates a landscape of the past every bit as fragmented and mysterious as the dystopian next milennium-Paris imagined by Godard in Alphaville.
Posted by Arthur S. at 4:17 AM 4 comments: