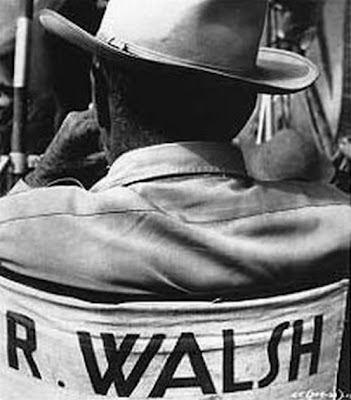 Which movies do people mean when they say, "they don't make 'em like they used to"? Among the old films, that is to say the classical Hollywood films, there are some film-makers whose works have retained a vogue. Their films have a certain feeling for modern life that touches audiences as directly as they did in their first runs. One thinks of Preston Sturges, Billy Wilder, Elia Kazan and Howard Hawks. Then there are those film-makers whose works have a cult appeal like the westerns of Anthony Mann, the crime films of Otto Preminger, Samuel Fuller and Nicholas Ray, the RKO horror films of Val Lewton, Vincente Minnelli's musicals or Sirk's 50s colour melodramas. Then of course there are international treasures such as John Ford and Alfred Hitchcock.

Where does this leave a film-maker by the name of Raoul Walsh?

Walsh is known and admired for his crime films - The Roaring Twenties, High Sierra and of course, White Heat. A masterpiece like The Strawberry Blonde, starring James Cagney, Olivia DeHavilland and a Rita Hayworth-before-she-became-Rita Hayworth; while still little known is at least available via the Warner Archive stable and its cast is sure to attract attention.Just last year, The Man I Love one of the greatest films about the immediate post-war American society was made available and the response to the film has been good. There are his silent films, like Regeneration - an early post-Musketeers of Pig Alley-pre-Scarface gangster film and then the first The Thief of Bagdad. Unfortunately many films are lost, including The Honor System which John Ford ranked as one of his favourite films.

Me and My Gal and The Bowery were made in the space of two years, 1932-1933, a significant period in American film history. The early sound pre-code period was not as we were led to believe by early historians a period where cinema stagnated due to the influx of theatrical-minded writers of the East Coast, it was also a period where film-makers jumped at the chance to let audiences hear how Americans actually talked and through that how they behaved and lives with one another. These films are all about the love of language, of saying things for the first time and this is reflected in the vitality of the rhythm of these two films. In Walsh's films one gets the feeling of invention, that he is making films like it was in the old American Biograph days. Walsh of course was there, he learnt it all from the "Old Man" himself.

In Me and My Gal, listen to the casual off-hand manner of Spencer Tracy's waterfront cop Danny Dolan in his conversation with a stevedore. 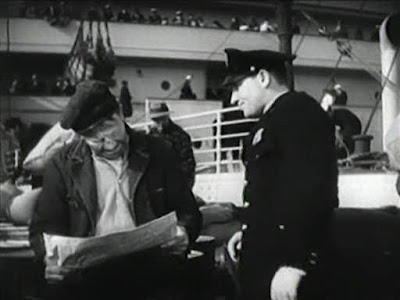 Frank talks about the new Pagliacci production at the Metropolitan Opera. Danny says that he was thinking of going to see a burlesque show(pronounced bur-le-cue show) himself. They then talk about the Depression as Frank reads about the latest left-opiniated writer's rant against the breakdown of the capitalist economy. Frank agrees. In the background of course we see a great crowd of people engaged in making the waterfront function. Walsh's film is arranged in a series of vignettes about Danny's interactions with the people in his beat. An Irish-American peasant, he approaches people without any pretentions of authority and interprets his position as a keeper-of-peace with devilish amusement. When a drunk approaches him, Danny regards him with the same amusement as Bogart and Co. do Walter Brennan in To Have and Have Not. Then we see kids play a game. One of them hits a ball straight into a glass window and there's a fight between them as to who did it. When Danny approaches them, he asks one of them, "You think you can take him out?" and lets the fighting continue as before.

Then of course Danny walks into a bar...

At the counter is Helen Riley(Joan Bennett). Danny again finds the same drunk he accosted earlier sitting at the table at the right edge of the frame. He then moves to the counter and buys some bread. He then turns to the register.

Danny - Hiya, red. Here's half a buck!
Helen - Yeah, I know what it is. And my name's not red...and besides my hair is blonde.
Danny - Well whatever you are, you have very beautiful hair!

The way the actors move in the frame, the way they interact and the delivery of the lines in a Walsh film is what creates his special magic. The same can be glimpsed in The Strawberry Blonde in the relationship between James Cagney and Olivia DeHavilland. That is the heart of Walsh's films. As Tag Gallagher notes, in a characteristically astute and intellectually passionate examination of Walsh, his cinema is interactive. The working class New York waterfront of this film becomes in the course of the film a place of which we retain memories. And Danny and Helen become in the course of the film a bunch of regular pals. And of course the film also finds time to invent the heist film genre along the way courtesy of the gangster ex-boyfriend(George Walsh, Raoul's younger brother) who raids a bank. 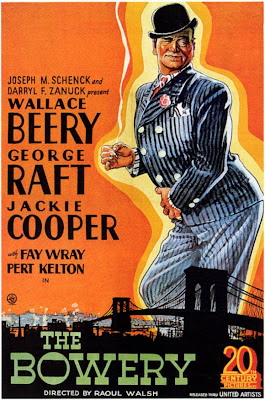 The Bowery was made in 1933, the same year as Sailor's Luck(which I haven't seen). It's protagonist is Chuck Connors(Wallace Beery), who runs his own bar in ''The Bowery'', a New York district known for ethnic strife. The film is set in the "Gay 90s" and the film after a dull title card plunges us straight into the days of old. 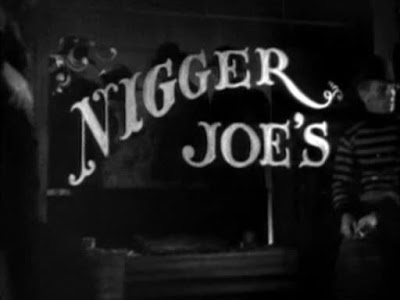 Needless to say, today's audiences won't appreciate The Bowery for what it is, a nostalgic reverie of Walsh's childhood in an Irish-American ghetto. It's hard for today's society of ethno-social correctness to share the film's fascination for a society as brazenly racist, sexist and violent as the one on display in this film. It's a work of urban folklore that very few American films have touched on or revisited. After this there was of course Samuel Fuller's Park Row which was set in roughly the same period and revolved around the early days of journalism. Then of course there's Martin Scorsese's Gangs of New York which directly "quotes" the most famous scene of this film. The heroes of The Bowery are two brutal rivals - Chuck Connors(Wallace Beery) and Steve Brodie(George Raft). Neither actor were ever better. Like many Walsh characters, they are fabulists, fibbers and performers. In the case of Chuck, he's an old-time kingpin of the street. He shelters the orphaned and abandoned of the street and takes them under his wing. He's a local hero. But he'll be superseded by Brodie.

The way both of them fight and maintain their hold is through spectacle. In a boxing-match between both of their respective gangs, Brodie wins by secretly slipping in real-life boxing hero John L. Sullivan(George Walsh, the brother again) to defeat Connors unwitting chump. Then Brodie decides to one-up everyone by faking a jump off the Brooklyn Bridge(Brodie is a real figure who apparently did gain infamy for doing this). Of course when the time comes, he has no chance to back out. So he'll have to jump for real. The Bowery is about a world, a culture with all its flaws that will be wiped away and the gutter feudalities of the two heroes will go with it. The world of The Bowery is one where the characters are trapped in self-made myths, and self-told tales.

In both these films, Walsh creates whole worlds filled with people. In one case, the people of the present day New York and in the other, the New York of his childhood, as nostalgic and inaccurate as it always is. And the creation of this world has the same spirit of discovery as in the early Griffith films because now it's wedded to a personal aesthetic and viewpoint. Walsh was a fabulist to the core, an adventurer who at the age of 15 travelled and drifted far until he came across Griffith and became a film-maker. He started as an actor until a jackrabbit jumped through his car window destroying his right eye(this incident is homaged in High Sierra).

Both The Bowery and Me and My Gal(among other Walsh films) are films filled with a spirit of invention and discovery. In that sense, it's not the kind that's made anymore. Not in terms of subject matter but in the approach of the film-maker to his actors and through them his audience. This makes it all the more necessary for a film such as this to be restored and re-issued. It's a cinema of excellent craftsmanship, great performances and wonderful dialogue. It's also a cinema in the spirit of fun and adventure. In today's world, you don't often feel the people who made it had any fun making it, with Walsh at his best, you always do.

So if you'd like to ensure that films such as these ones by Walsh and others just like it can be seen around the world then...proceed here...